As new technologies continue to develop and improve, private security is not immune to its own technological revolution. Whether it is for securing industrial or commercial buildings, homes, the protection of people and property or operational management tools, equipment and technologies are constantly progressing and many other innovations are expected in the coming years. Our company wishes to provide you with our human know-how combined with technological tools ensuring an increased and optimal quality of security. 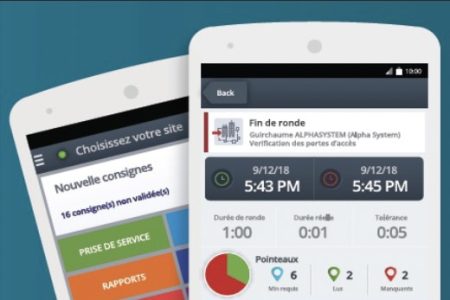 A real work tool for the security guard, it allows him to record any event, follow rounds, manage visitors or send reports.

Gone are the days of the old paper handrail, which is never consulted and often incorrectly filled in. With the electronic handrail, we configure with you what our security guard should enter according to your needs. Thanks to this connected tool, you will be able to consult what the security guard has observed/realised from your computer whether you are in the office, at home or on the move.

Secured and certified, the electronic handrail is recognised as evidence in court. 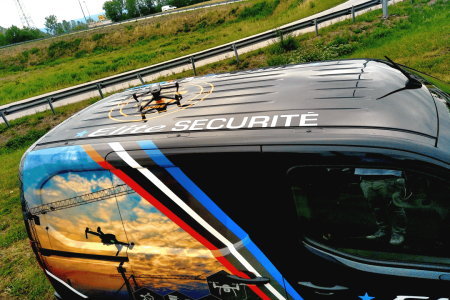 Private security is now faced with new issues, so it is vital to reinvent and innovate in order to be part of the future.

Fast, easy to operate, discreet and able to evolve in a programmed way, drones are simply perfect for surveillance and reconnaissance missions in difficult to access or dangerous areas.

The device is perfectly capable of making rounds in automatic mode while carrying a thermal camera, in order to detect any intrusion in a defined space.

The drone allows to spot individuals without exposing the security guard, allows the immediate detection of a fire outbreak and exempts the company from multiplying the number of video surveillance cameras on the same site.

Its HD 360° stabilized camera, its optical zoom, its thermal camera and the precision of its onboard sensors allow professionals to intervene quickly and efficiently.

Aerial supervision is not intended to replace human intervention.

On the contrary, the drone puts its performance at the service of the teams in charge of the security of goods and people on the ground by delivering them additional information in real time in order to facilitate their decision making.

It complements the traditional technical and human resources deployed.

Still forbidden by regulation for private security companies. Elite SÉCURITÉ is committed to changing the regulations concerning its use.

A real protection tool for our agents and the public, the use of on-board cameras would considerably reduce conflict situations. Its image recording, completed by image management software (already in existence), would provide an additional element of proof while respecting privacy, the law and the regulations.

Aware that new technologies must be regulated and supervised for a reasonable and efficient use, we are waiting for the laws to evolve, but we are convinced that in the next few years its integration in private security will further professionalise our profession.

With this in mind, we have chosen to communicate and exchange with professionals and players in the field of security, onboard cameras and image processing. We are already in contact with companies and organisations such as AXON, MILIPOL, CNIL etc. ….

We are already prepared for the day when on-board cameras are authorised in the field of private security, we will be able to equip our agents quickly.

PROTECT YOUR SURROUNDINGS & YOUR PROPERTY